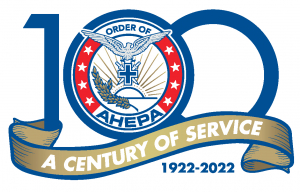 AHEPA donated a statue of Harry Truman to Greece in honor of the Truman Doctrine which gave $2 billion in foreign aid to the Greek government to help fight off Communist guerrillas during the country’s civil war between 1946 and 1949. We are proud President Truman was a member of AHEPA.

The District 9 travels started in AHEPA Burlington, Vermont Chapter. This past Friday Burlington gave the Supreme President a tour of the local Ronald McDonald house. The chapter, as it has for one of its staple programs for many years, cooked dinner for the children in the house and their families. Ronald McDonald Houses are places children suffering from cancer and other illnesses stay with their families while undergoing treatment.

Chapter President and Chef Extraordinaire Greg Lambesis and the chapter members assist in preparing home cooked dinners for ailing children and their families.

Thereafter, a meeting was arranged with Hellenic and Cyprus Affairs Chair Zenon Chirstodoulou in Manchester, New Hampshire with US Senator Amy Klobuchar, a proponent of Hellenic and Cypriot causes.

The Manchester, New Hampshire Chapter hosted a breakfast for the Supreme President where they discussed current affairs from the most recent trip to Athens, the status of our projects including the Wildfires relief fund and of course, membership.

From there, it was off to Portsmouth, New Hampshire, where the Supreme President and the chapter members met at Cafe Nostimo, where the chapter has their meetings hosted by Dean Zottos. President Fotis Zotos and his officers received materials for the membership drive.

A third state awaited the Supreme president and the District Governor. Portland , Maine Chapter President Tim Gikas, Chris Dilios and George Koukos awaited for the Maine portion of the tour. The membership drive was front and center in all three states!

We are compiling a mailing list of all District Lodge 9 brothers. Please enter your email address and what chapter you belong with on the e-mail and contact registration form. If you would like more information on District 9, please contact the District Governor Richard Rizza at ahepadistrict9@gmail.com